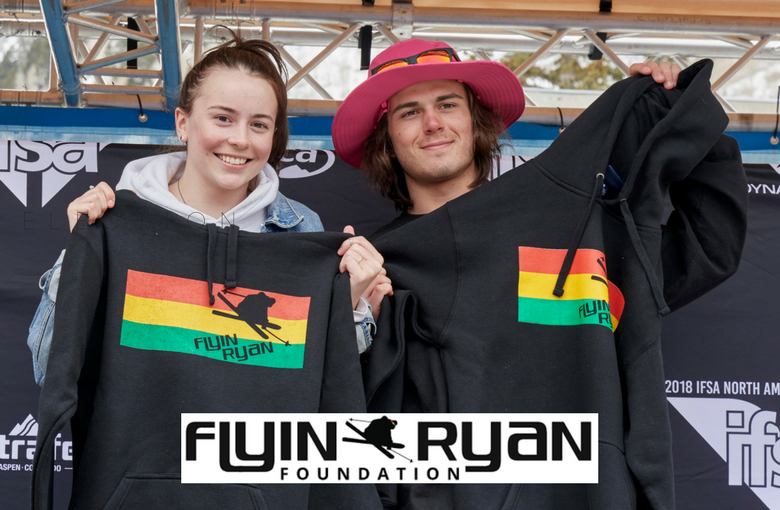 On behalf of the Flyin’ Ryan Foundation, I was honored to present the Flyin’ Ryan Awards at the 2018 IFSA Junior North American Championships to Karina Jorgensen-Fullam from the Whistler Freeride Club and Josh Gold of SquawFree. This award is presented to the male and female athlete who best demonstrated the positive attitude, camaraderie, and genuine love for the sport of Freeride skiing and snowboarding that were exemplified by Ryan Hawks. Head coaches from programs across North America were tasked to observe athletes in the start and finish area during the event and note the athletes who stood out above the others. After a week of non-stop action at Snowbird, we reviewed the names and stories and selected Karina and Josh as the award recipients. 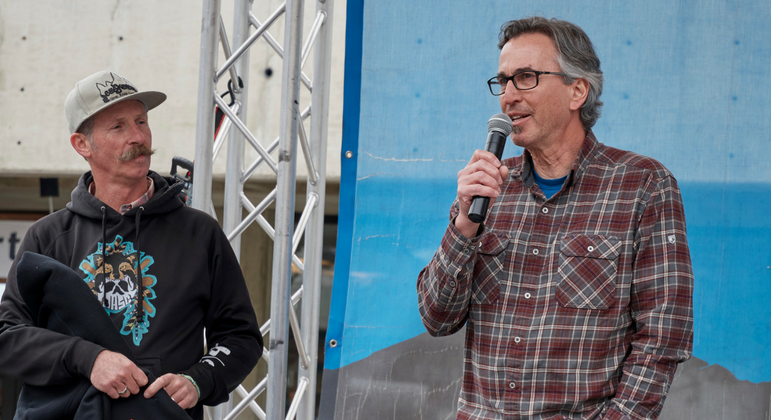 There were many unbelievably talented skiers and riders in this competition, and the energy, joy, creativity, and raw courage that they demonstrated was extremely entertaining and most definitely inspiring. Karina and Josh, and others like them, embody Ryan’s spirit with their positive energy and their pure joy at being with friends on the mountain. Individuals like Karina and Josh are the ones who I believe make our sport so great. I want to thank them for their influential conduct from the bottom of my heart.
I ask that all Freeride athletes look around at their friends and teammates the next time you gather for training or competition. I’ll tell you from my experience that many of you are going to be friends for a long time. That is one of the beauties within the sport of Freeride. In ten or twenty years you may be visiting each other on a ski or snowboard vacation wherever you happen to live, sleeping in each other’s guest rooms, and you may have spouses and kids who enjoy skiing or riding and hanging out together. Just as Freeride is a lifetime sport, the friendships that we make on the mountain also last a lifetime. At your next competition I encourage you to introduce yourself to someone new, maybe from a different mountain or region. You never know where that new friendship may lead, and I’m sure you will be glad for a new connection.

These three words are the mantra for the Flyin’ Ryan Hawks Foundation. The 14 Core Principles for Living, as written down by Ryan Hawks before his passing, provided him with a compass to guide his decision making, whether in sports, school, relationships or other aspects of daily living. People with an established, self-composed set of Core Values have a touchstone, a reference point for making decisions, big and small.
For more information on the Flyin’ Ryan Foundation go to www.flyinryanhawks.org.

Make sure to check out the Core Values Challenge, Adventure Scholarship, and Decisions programs!

About the author: Bryan Salatino is a Flyin’ Ryan Coach and author of the Flyin’ Ryan Decisions Program for Athletes. He is also the Vice President of the IFSA Board of Directors and is the Freeride Program Director for the Smugglers’ Notch Ski and Snowboard Club at Smugglers’ Notch Resort in Vermont. 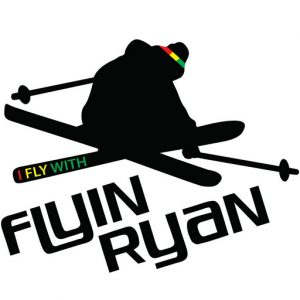